I’m quite excited to bring this particular cover reveal to you, as it is for the Sequel to the fantastic New Adult title, WANT, written by my friend, and fellow Inkspell author, Stephanie Lawton.

If you read WANT, or have seen the cover, you will see why the cover for NEED is just perfect. 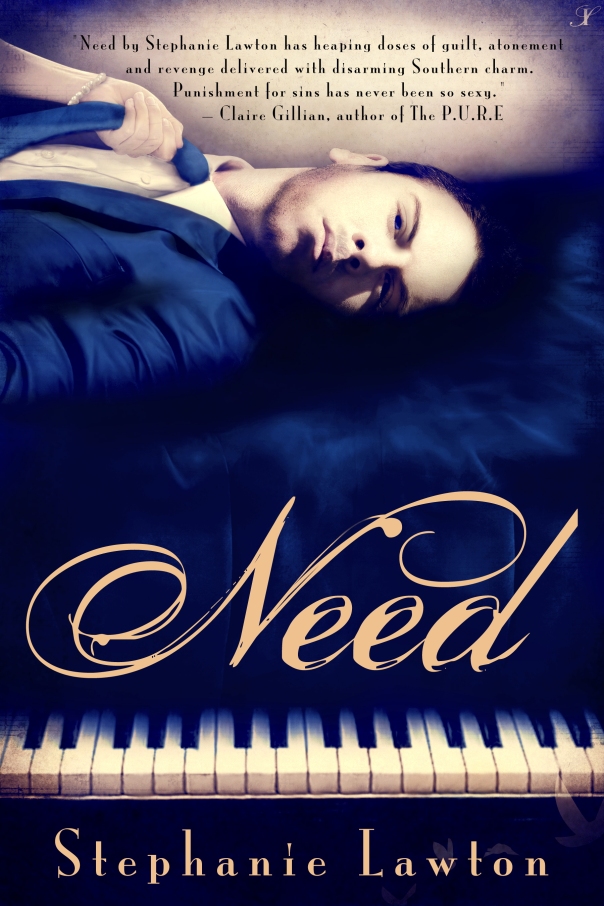 Isaac Laroche is cursed. All he wants to do is hide out and feel sorry for himself. Never mind that he got caught sleeping with his seventeen-year-old piano student, or that he abandoned her when the truth was exposed.

Isaac’s feisty high school sweetheart has different plans. Heather Swann has returned to their hometown of Mobile, Alabama, to regroup after breaking up with her troll of a fiancé. She’s restless and looking for a diversion, but she bites off more than she can chew when she sets her sights on rehabilitating Isaac with her unorthodox sexual, mental, and physical plans.

The two quickly reconnect, but their happiness is threatened by family secrets, old vendettas and the death of a beloved father-figure.

Can Heather handle Isaac’s baggage, or will her own come back to haunt them both? 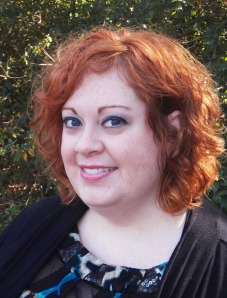 After collecting a couple English degrees in the Midwest, Stephanie Lawton suddenly awoke in the deepest reaches of the Deep South. Culture shock inspired her to write about Mobile, Alabama, her adopted city, and all the ways Southern culture, history and attitudes seduce the unsuspecting.

A lover of all things gothic, she can often be spotted photographing old cemeteries, historic buildings and, ironically, the beautiful beaches of the Gulf Coast. She also has a tendency to psychoanalyze people, which comes in handy when creating character profiles.

Happy Release Day to WANT by Stephanie Lawton #WANT_SLawton #YA 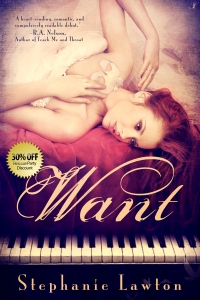 Forbidden fruit can be the sweetest—or the most dangerous.

Back of the Book: Julianne counts the days until she can pack her bags and leave her old-money, tradition-bound Southern town where appearance is everything and secrecy is a way of life. A piano virtuoso, she dreams of attending a prestigious music school in Boston. Failure is not an option, so she enlists the help of New England Conservatory graduate Isaac Laroche to help her.

She can’t understand why he suddenly gave up Boston’s music scene to return to the South. He doesn’t know her life depends on escaping it. Julianne must face down madness from without, just as it threatens from within. Isaac must resist an inappropriate attraction, but an indiscretion at a Mardi Gras ball—the pinnacle event for Mobile’s elite—forces their present wants and needs to collide with sins of the past.

Will Julianne accept the help she’s offered and get everything she ever wanted, or will she self-destruct and take Isaac down with her?

Early Praise for WANT:
“A heart-rending, romantic, and compulsively readable debut. You will remember Juli and Isaac for a long time to come!” –R.A. Nelson, author of Teach Me and Throat

“This story opened my eyes to how exciting contemporary YA romance can be” – Lisa Voisin, Author of “The Watcher”

Please visit my webpage to enter the Rafflecopter Giveaway, since WordPress won’t allow me to host the widget from here 😦

Guest Post by Stephanie Lawton: “What a snob!”—How I got the idea for Want #WANT_SLawton #YA 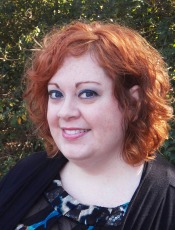 Book ideas come from any number of sources: TV shows, a song, a dream. Mine came from a snobby lady at a Mardi Gras parade in Mobile, Alabama.

It was our first Mardi Gras since moving to the Deep South from Ohio, and I was in the midst of an epic case of culture shock. I couldn’t understand why-oh-why the wives of the parading mystic society members wore hats, heels, pearls and fur coats to a parade. It was seventy degrees outside!

We’d been to a number of parades and had a great time mingling with other average Mobilians, but on this day, one of the older, more prestigious societies was rolling. Usually the wives sit in the grandstands provided for them. We ended up next to a group who chose to watch from the street, for whatever reason.

Our kids were quite young—our daughter was one and our son was four—and very cute, which means they got a crap-ton of stuffed animals and other throws tossed their way. When we got too much stuff, we made sure to share with the other people around us. It’s an unwritten rule in Mobile that you take care of the kids near you so everyone has a good time.

The fur-coated ladies next to us had apparently not gotten the memo. They hogged all the throws and when one suggested they share, I overheard the other tell her, “No way!”

Now, what on earth does a wealthy, middle-aged woman need with several pounds of beads and trinkets that are clearly meant for children? She was so rude that I took a picture of her from the back so I could remember that moment.

She stayed with me and I began to ask myself questions: How insecure is she that she flaunts her fur coat in tank-top weather? How bitter must you be to refuse to share with a bunch of little kids? What secrets is she hiding under that coat and big hair? What is her husband like? Her poor children?

And this is where my character Julianne was born. Her mother is so preoccupied with keeping up appearances that she can’t see how dysfunctional she is and that she’s transferring it to her children, especially her gifted seventeen-year-old daughter. Add in a father who’s unplugged, a brother who’s left the nest for college, and a mentor/grandfather-type whose sudden illness turns Julianne’s world upside down, and you’ve got a recipe for disaster … or a YA book. 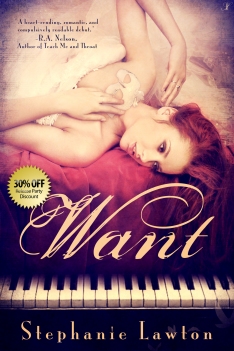 Back of the Book: Julianne counts the days until she can pack her bags and leave her old-money, tradition-bound Southern town where appearance is everything and secrecy is a way of life. A piano virtuoso, she dreams of attending a prestigious music school in Boston. Failure is not an option, so she enlists the help of New England Conservatory graduate Isaac Laroche to help her.
She can’t understand why he suddenly gave up Boston’s music scene to return to the South. He doesn’t know her life depends on escaping it. Julianne must face down madness from without, just as it threatens from within. Isaac must resist an inappropriate attraction, but an indiscretion at a Mardi Gras ball-the pinnacle event for Mobile’s elite-forces their present wants and needs to collide with sins of the past.

Will Julianne accept the help she’s offered and get everything she ever wanted, or will she self-destruct and take Isaac down with her?

GIVEAWAY!!! You should enter!!

I thought for W day, I would post my review of the YA novel I just finished titled, WANT. (appropriate, right?)

Want by Stephanie Lawton
My rating: 5 of 5 stars

Let me start by saying this book was absolutely nothing like what I expected when I sat down to read. I have read a fair share of YA books, but WANT is miles above anything I have read from this genre lately.

Stephanie Lawton presents us with a southern world, steeped in tradition and dark secrets. The MC, Julianne is flawed and “real” and I was rooting for her from page one. What a wonderful departure this was from the usual perfect life, beautiful flawless MC’s present in so much of today’s YA fiction.

About halfway through the novel I had worried I wouldn’t be pleased with the ending based on how the story was unfolding, but boy was I wrong. Ms. Lawton drew me into her southern world and had me gnawing my nails as I prayed for Julianne to make the right choices — pick the right man. Don’t even get me going on the hotness of the men — one dark and brooding, one the perfect southern gent (even if he is a Yankee).

While some of the subject matter was deep and emotional, I feel it was well handled and none of the drama read as over the top or gratuitous. All of it lended to the authentic feel to the story.

Really enjoyed this one a great deal and will be looking for more titles by this talented new author.

View all my reviews

From Fellow Inkspell Author: Stephanie Lawton (A Chance to Get to Know Her Better)

From Fellow Inkspell Author: Stephanie Lawton (A Chance to Get to Know Her Better)

After following some fellow writer friends’ blogs, I’ve come to realize I must come across as kinda serious on here, which is hilarious since I’m one of the goofiest people I know. I have the mouth of a sailor and the sense of humor of a sixteen-year-old boy, but I guess in an effort to be “professional,” I may have sacrificed personality.

So. Here’s a totally self-indulgent post to prove I am not a robot, no matter what CAPTCHA says. (Completely stolen from fellow Inkspell author Brooke Moss.)

A. Age: Really? We have to start with age? Okay, fine. I’m 32. But I look older (thanks for those genes, Dad). It was cool when I was in high school and got mistaken for a college student or hit on by my boyfriends’ dads, but now? Not so much. Especially when people assume my mother and I are sisters. (Stop dying…